For This project we designed a way to filter water for a designated area. I was trying to filter ammonia and methane out of Australia.
The Aussies

We chose the screen of a TV because it was easily accessible to our group.

We chose PVC pipe because it is cheap and easy to assemble as a frame for our fresnel lense.

Green Glass Bottle is Free if taken out of recycling

We needed colored glass, and this bottle worked well for holding the water.

This coil didn’t allow water to seep out.

Hot glue combined the black coil and the lid of the glass bottle together, so that the steam would not escape the bottle.

Narrabri is a city in New South Wales, Australia. It is a highly agricultural region. Nearby is the Namoi river, which has platypuses*. This makes it amazing. Unfortunately, the river is also highly contaminated by methane and ammonia from fracking. Besides the obvious danger to the  platypuses, this also poses a hazard to the people drinking the water.

Narrabri is a modern town of 7,300 people who, according to the Narrabri tourism website, “enjoy good shopping, good sporting facilities,” and a “very good way of life”. Narrabri is further described as a “vibrant centre”. However, a sinister danger may soon befall this charming Aussie town. The residents are under threat of unclean water in their beloved town. Will the people go thirsty? Will the town dry up with the water sources? Will Peyton Manning return to the Denver Broncos? No one knows.

Narrabri is average in most respects to most cities of its size in Australia. People live in relative ease, peace is easily kept, people talk like the protagonists in survival shows, etc. It is located in the Australian Outback, northwest of Sydney. There are public schools with bad lunches (presumably) and the political system gives people reason to complain about something. Near Narrabri are the towns of Boggabri, Bellata, Gwabegar, and Wee Waa. These towns make me wonder why people give such boring names to cities in the United States. A certain town east of Durango is probably kicking itself for choosing Bayfield. They could have chosen far more interesting names like Humpty Doo, Coo Wee Rup, Diapur, or Yippi Ki Yay. I only made one of those up. This proves that Aussies are approximately 2.5 times as creative as Americans. So pick up your game America! (Especially you, Bayfield.)

In Narrabri, the citizens enjoy typical Aussie comforts such as cars, kangaroos, and beer. Aussies love their beer. Once, a particularly radical group of Aussies proposed to invade New Zealand. If this was accomplished, they said, there would be a public holiday, giving them more chances to sit back and crack a beer. I’m not kidding. Look it up on Youtube.

We are trying to remove ammonia from the water. We are going to filter the ammonia out by using an fresnel lens to distill the water, therefore getting rid of the ammonia.


Tested on snapple jar and it did not work. Switched to larger green bottle.


We tested green bottle, but due to lack of sunlight, we were not able to successfully test.


Today we worked on the writing, because we have gotten really behind. Each group member was given a task to complete over the weekend.


Today we finished the write-up and sealed all the holes in the tubing.


Today Will worked on the area description and since we had sun today, the rest of us went outside and tested. 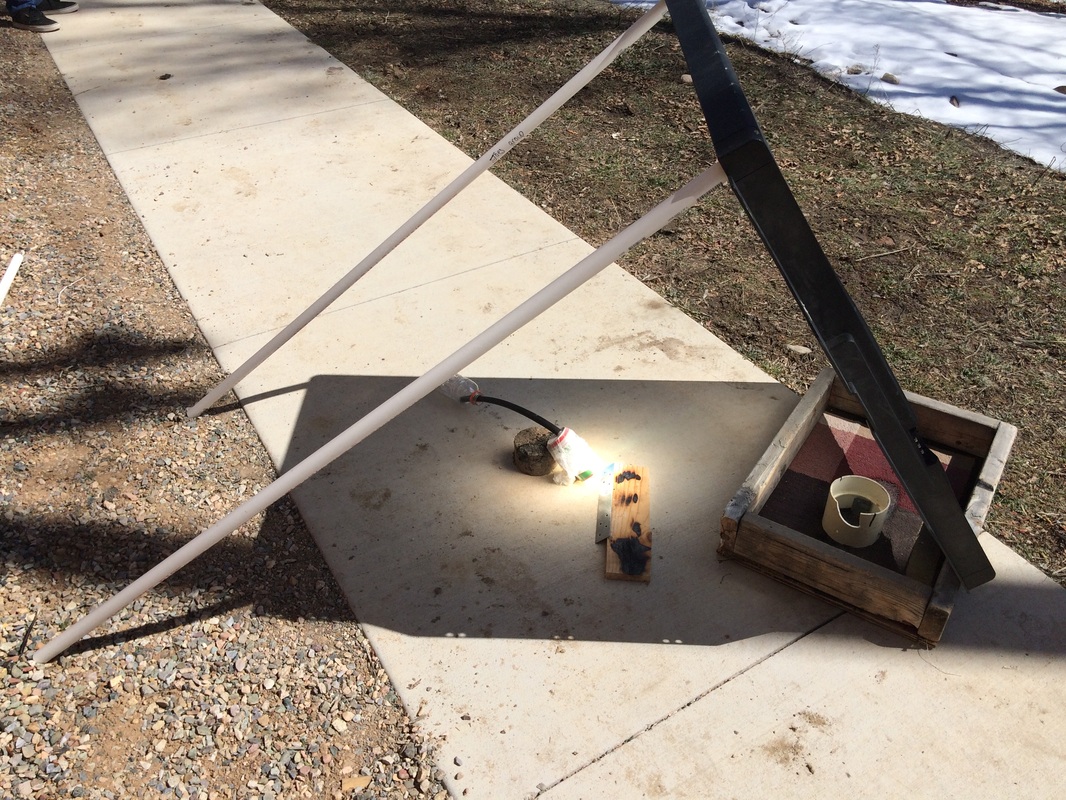 In this project we learned about how snow flakes are formed, how avalanches occur, and created a poster about snow science. We were asked to answer 3 questions.
1) In what ways was Snow Science relevant to your life?
Snow science is relative in my life because there is snow all around Colorado.

2) What do you now understand about the role snow and water play in the American West (be specific)?

3.  What skill did you develop through engaging this material?
I learned a lot in this project. I didn't really know anything about avalanches or snow for that matter. I now know what to do if there is an avalanche, and how to spot one that can occur.

Introduction: In this project we built water rockets. We picked something to test, and experiment it. My Partner Kai and I tested drag, we used nose cone to show drag. I built a rocket that had a pointed nose cone, and my partner Kai built a rocket that had a flat nose cone. We decided to test this because I have helped my brother with science fair the past couple of years and he has had to deal a lot with drag so we chose this because I knew some about this.


Hypothesis: The hypothesis is the rocket with the pointed nose cone will got the highest, because it will travel through the air with less resistance.

4.      Launch and record how high it goes using a protractor.

In conclusion Drag changed the height of the rocket. My rocket went higher than Kai’s rocket. This is because my rocket has a lot less air resistance on it, so it could move through the air easier. In conclusion the hypothesis was correct and the rocket with the pointy nose cone went the highest.